Can’t accuse Dennis Ferrer of flooding the market – his slow, almost austere release schedule makes it for damn sure that a new Dennis Ferrer record is an “event” rather than something on a list of links on some clown’s Facebook page.

His latest release, “Bubbletop,” sees a return to Defected with a track that seems to psychically tap into a type of freaky early ’90s Techno for its hard hook and bring it into 2016 via meditative seance. Sagine’s vocals are sparse in the “Bubblewrap Mix”; the entire track is streamlined for maximum effect. Even though there are tracks that sound like parts of this, there’s no track that sounds like all of this and “Bubbletop” itself is as unique as a fingerprint in a set. Play the first 30 seconds and you’ll have instant recognition and, most likely, a happy dancefloor.

How about Dennis Ferrer at Spybar this weekend?

Dr. Packer: The Doctor is in the House

Defected Does America in November Tour 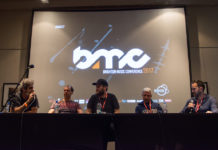 Brighton Music Conference 2018 is the Most Ambitious Event to Date

The Musical Renaissance of Detroit’s Filthiest

Getting your shit together with sample management tool Cosmos from Waves

Computers cannot be assigned copyright & it’s mostly because of a...