He does it once more! That’s right Chicago’s own DJ Slugo drops another classic booty mix CD. And he proves that he must be recognized as truly one of the foremost pioneers of Ghetto House, aka Juke. This album is to be played at high decibels with ample amounts of bass, so that you can absorb the essence of this genre.

The album boasts a total of 27 tracks, and several of them are laced with Crunk-styled rappers. You will hear the vocals of Looney Bin, K-Scrilla, Trill McCoy, and Jah Rista. The vocals are not in the form of traditional verse, but rather catchy phrases and hooks.

Juke music is considered a bastard child of traditional House Music, but it must be given attention and respect. As far as attention, the genre is the favorite among 30 and younger people on the south and west sides of the city. And it must be given respect because Juke music is the evolution of the Jack music of the early- and mid-eighties. Yep! – before it was Juke, it was Jack. The only difference is that the BPM have been sped up from 120 bpm to 140 BPM, and the phrases are no longer the cliché “Jack Your Body” but rather X-rated porno phrases. But again let it be known that Jack traxs like “Jack the D*%k” allowed an appetite for this flavor of House Music.

The best of thing about Juke music is that it has preserved the essence of “Southside-style” traxs: the percussions of the tom-tom, snares, handclaps, snaps, sticks, and the mighty 4/4 bass kick. Those aforementioned elements were the signature sound of Chicago House Music. So I applaud the efforts of DJ Slugo (not to mention DJs Lemo, Deeon, PJ, and Milton) over the years. I give it 4 out of 5 stars. I would have given it 5 stars IF some of the tracks were played longer in the mix. It sure was an ear-tease to listen to some of those tracks for just a mere 1 minute and 20 seconds! 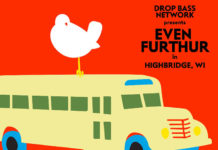 Even Furthur 2018 Presents Four More Days of Beats and Bliss

WITH 🧡 FOR DETROIT: The filmmakers behind God Said Give Em Drum Machines on the 12 year odyssey of making the ultimate Detroit techno documentary, plus Rees Urban on Dam Swindle and 10 Years of Heist; Lauren Krieger on Nala; Ultra Naté, Steve Mill and more — all inside 5 Mag Issue 201, out now →

October 4, 2022
Greek producer Steve Mill breaks a 3 year hiatus with a new EP on Tensnake's True Romance. Here's what else he's been up to.

SELECT: The Sound of Roots Underground

With Love for Detroit: Inside the New 5 Mag

Kaidi Tatham’s 4th studio album is a heartfelt celebration of his...

Community mourns after Berlin Nightclub death amid search for answers