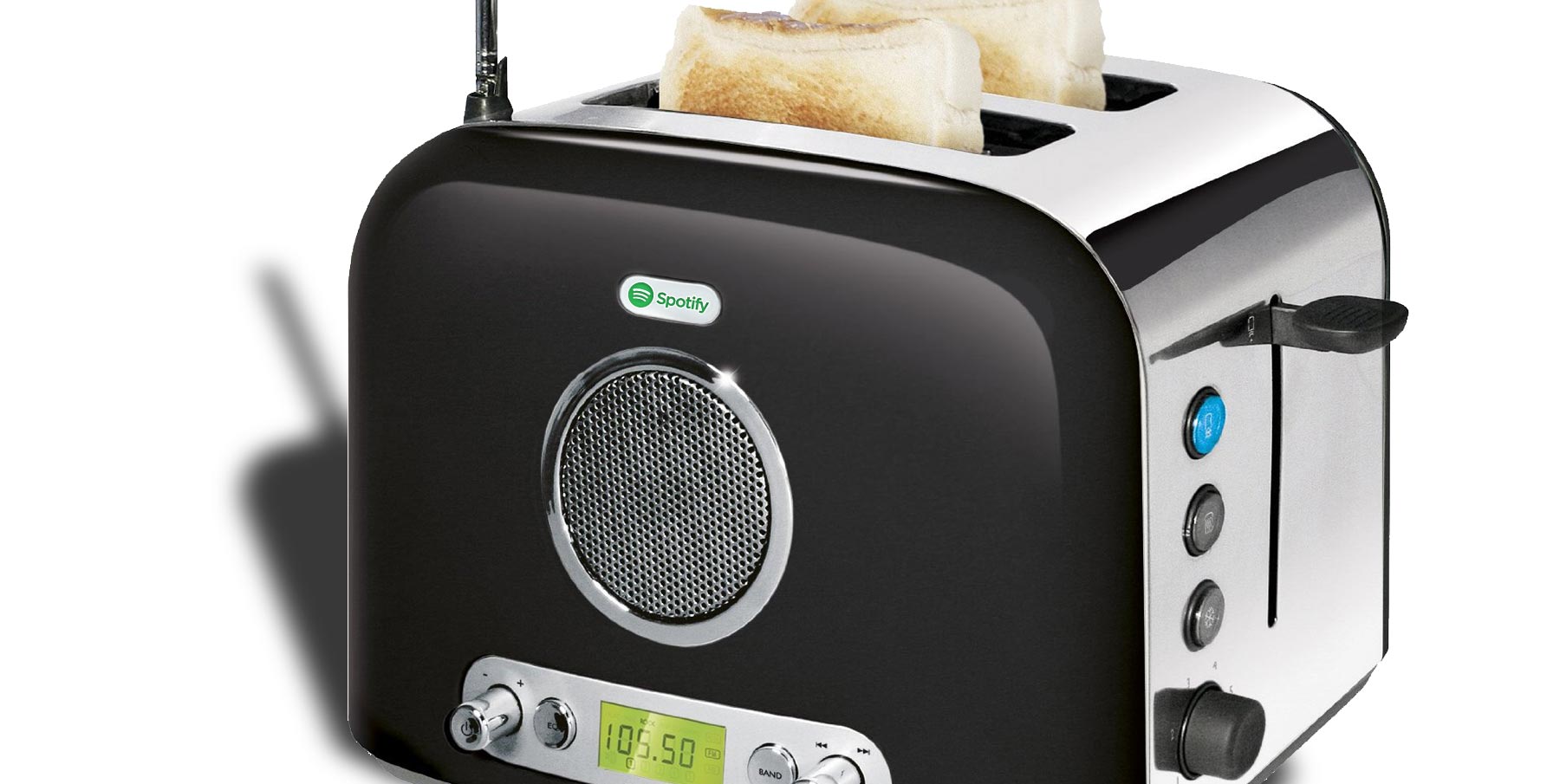 Streaming music is everywhere, and everyone seems to be launching their own subscription streaming service. Here are just a few of the companies queuing up to give away your records for a piece of a penny.

If you’re older than 30, you probably remember a time when the miracle of very small transistors made it possible to install AM/FM radios into every conceivable appliance inside your home. Terrestrial radio is utterly irrelevant for most people today, but there was a time on this green Earth when a team of energetic engineers from The Sharper Image catalog applied their genius to figuring out how to place radios into everything you could possibly buy. The theory was that a couple of dollars of electronics and the possibility of listening to Casey Kasem would convince you that you needed a new, hipper toaster, even if the old one made toast just fine, albeit without instrumental accompaniment.

Clocks were also a part of this trend of Better Living Through Enhanced Appliances, though being able to “schedule” when a coffee maker turns on has a legitimate purpose; listening to Thriller or Van Halen on a micropowered speaker that sounded like it was made out of steel wool and cardboard, not so much.

Technologist and inventor Al Mandel used to explain public adaption of technology with his observation that “the step after ubiquity is invisibility.” What he meant by this is that once technology had spread everywhere, we took for granted it would always be accessible. WiFi is everywhere; we only notice WiFi when it’s missing. Once every appliance has a radio, you’ll only notice it when you really want to listen to Men Without Hats while watching your toast brown.

And that’s where we are today with, of all things, music streaming.

All of this may seem depressing. And it is.

There was a time when Napster’s user-created catalog of damn near ever musical composition ever made (most of them mislabeled as Metallica songs) was daunting. When this gigantic library moved to iTunes and then to YouTube, it appeared so vast and overwhelming to the user as to be almost a work of art. Phrases such as the “celestial jukebox” were used to try to express the wonder of having access to every single piece of music ever made (and also mislabeled Metallica songs) in near instant time, and on demand. YouTube and then Spotify’s free service even eliminated the need to pay tiny amounts of money for this privilege.

And following ubiquity: invisibility. Streaming is everywhere, supplied by your mp3 player (an iPhone or any computer using iTunes and AppleMusic), web browser (YouTube) or app (Spotify, Pandora, etc.) If you are hit by an irresistible craving to listen to “My Sharona” at 4am anywhere in the connected world – and believe me brother, we’ve all been there – you likely can scratch that knacky itch, and scratch it for free.

AM/FM Radio And an Alarm!

Of course, none of these companies have actually made a profit doing this. Together they are grossing billions of dollars that would have otherwise gone into album or track sales, but they’re losing even more. Spotify is successful because everyone you know uses it. They’re far less successful at turning a profit off this fantastically large userbase – losses in 2014 totaled nearly $200 million.

Streaming music’s inability to make more than fractions of a penny for the artists or even that much for their bedazzled investors makes it surprising to find so many new entries trying to jump into the streaming music business (or “business”).

Some of these are companies you already know, bolting on a streaming capability to an existing model and hoping it takes off. This is true of SoundCloud, which has introduced Soundcloud Go, a new streaming feature similar to AppleMusic, Spotify and Pandora. Pandora, of course, also doesn’t make money – as a publicly traded company, we know it lost $170 million in 2015 alone.

All of this may seem depressing. And it is. It’s bad enough to think of the chuckleheads that ran the record labels squandering money on bad coke and Guns’N’Roses music videos.

I’m not opposed to that because someone can probably come up with a way for low-quality cocaine and self-indulgent wankery to make money.

Yet the best minds in the world have yet to figure out how streaming can ever make money.

Naturally, though, there are hundreds of Silicon Valley managers hyped up on Steve Jobs quotes that still want to try.

Why solve real problems when you can solve non-existent ones – like offering consumers yet another music streaming service?

My time covering SoundCloud, Beatport and other streaming services that have touched on the dance music industry has mainly been preoccupied by finding new ways to make fun of them. Nevertheless, hardly a week goes by that I don’t see another press release pass my desk, hyping another new streaming service or breathlessly announcing another “pivot” by an existing company.

CÜR is probably representative of most of them, which is to say it’s the saddest and most depressing. CÜR (no I don’t know what it means, and yes the metal-as-fuck umlaut is their touch, not mine) is pretty much the same as Spotify, AppleMusic or Pandora, except they charge even less money. Whether or not they’ve handed over the company’s vital organs to the music industry in exchange for streaming licenses, CÜR invites you to “CÜR8” your profile (no, I didn’t make that up, either) in exchange for $1.99 per month, ad-free. Essentially, CÜR is positioning itself as the company for those who see $10 a month for unlimited music as just too damn expensive. One would guess their payment rate per stream would be close to zero if anyone even used this service, or their goal was to run a company rather than make a company that someone that can run a company might want to buy.

And then there’s the mashups – companies that are like Bandcamp but emphasize streaming, or like SoundCloud but emphasize sales. Orfium is less of a pure streaming company as much as a mashup between Bandcamp and SoundCloud, offering competitive rates and a marketplace for selling songs. I have nothing to say about it really – it’s another clone in an oversaturated market, and while the marketplace is nice, it probably doesn’t do enough to differentiate itself from Bandcamp.

And It Also Makes Toast

And then there’s the pivot-ers. These are companies which have previously been in a market where they haven’t done very well, and are looking to jump into one that virtually guarantees failure.

WeTransfer is familiar to most people in the business, including DJs who have to move large files from here to there but don’t necessarily want a permanent copy of it floating around forever. This is potentially a good business to be in – it takes a real problem that people have and more or less solves it perfectly.

But why solve real problems when you can solve non-existent ones – like offering consumers yet another music streaming service?

You guessed it: WeTransfer is entering the crowded streaming market to pump Fleetwood Mac and Deadmau3 from their cloud-based servers to your brain. WeTransfer of course isn’t exactly a consumer-based service — one of the reasons it’s popular is that you don’t need to create an account to use it to send or receive files. The only real “customers” they have are the ones who pay for premium accounts, which is likely a fairly small sliver of their total users. But they don’t want to stop thinkin’ ’bout tomorrow either, I suppose, and so our cloud-based file sharing company gets its streaming music service, and our toaster finally gets its AM/FM radio.

Oh, and remember Napster, which started all of this? It’s back from the dead too, staggering like a shot zombie through a marketplace of streaming start-ups. The name has been passed around like a cold sore in a hippie squat until it wound up associated with Best Buy and then Rhapsody. Rhapsody officially ceased to exist in July 2016, and now you can live your nostalgia for an era of free music that started this whole thing by paying the same ten bucks a month for basically the same catalog everyone else has, and calling it “Napster.”

What Do You Do? [Spoiler: Nothing.]

As an independent artist or label, what are you to do? I mean, most of this shit is ridiculous. Is it even worth the time to deal with these services and ensure that everything is on the up & up? Is it worthwhile to participate in the next Orfium, which is in reality merely the next HearThis, which is kinda the next SoundCloud with a small part of Bandcamp bolted on?

I always advise people who ask about this to create accounts on every new service you can – not to participate, but to establish your identity. There’s nothing worse than having to add a series of numbers or strange geographic signs later should WeTransfer become the future of worldwide streaming because some goon in Ukraine has already taken your name and won’t let it go.

That’s true of Orfium, which wants artists to participate, but many of these are simply buying licenses and unless you’re using Thom Yorke’s withdrawal strategy, you’re already “participating” whether you like it or not.

Spotify defies expectations and disappoints everyone

Artists stand to lose out when Google Play goes down 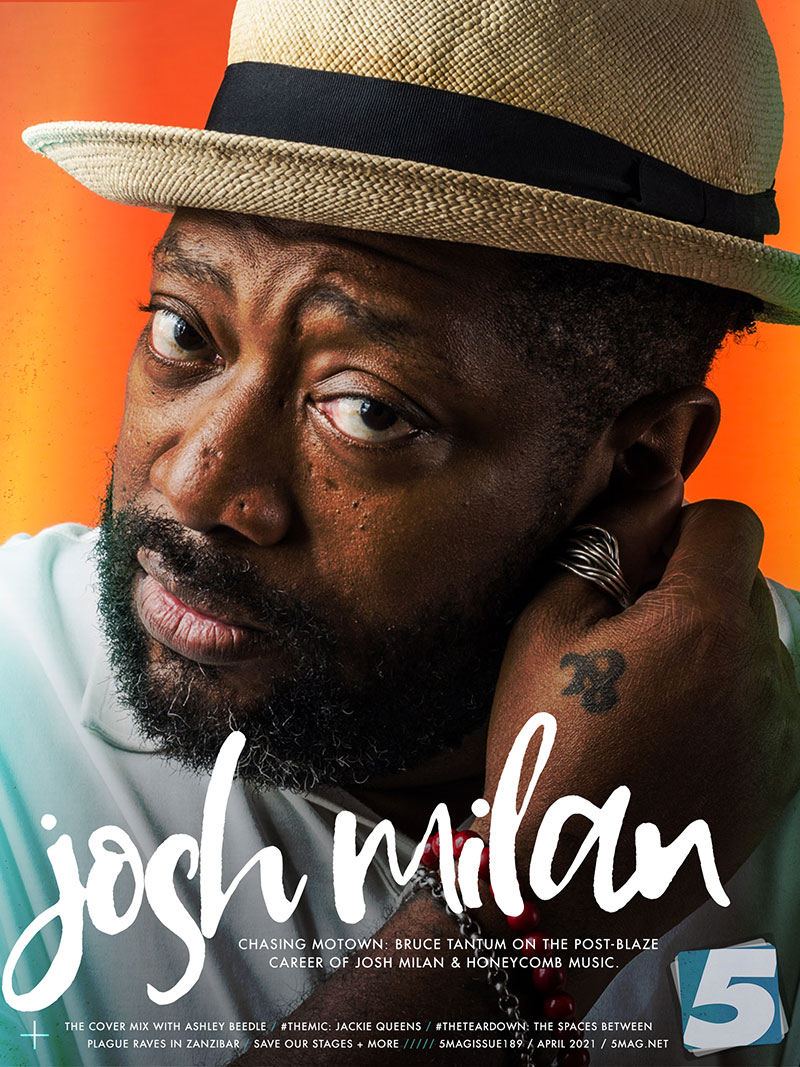